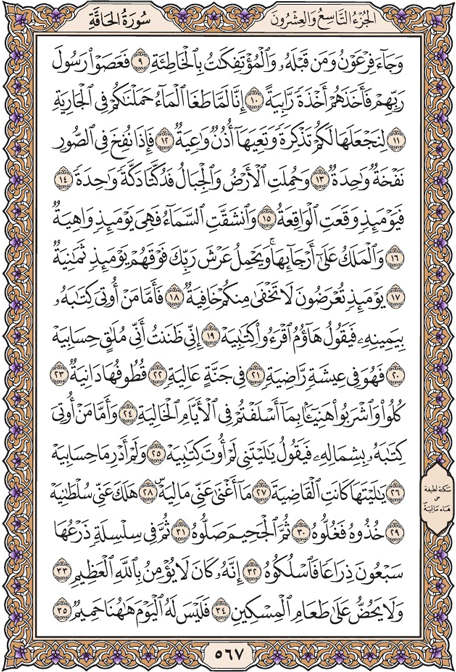 Then came the Pharaoh, and those before him whose habitations were overthrown while they were committing crimes.

When they disobeyed the apostle of their Lord He seized them with an overwhelming punishment.

When the water rose in flood, We bore you in the ark,

In order to make it a warning for you, and that the ear retentive may preserve it.

When the single blast is sounded on the trumpet,

And the earth and mountains heaved and crushed to powder with one levelling blow,

On that Day will come what is to come.

The sky will cleave asunder on that day and fall to pieces.

On its fringes will be angels, eight of them, bearing their Lord's throne aloft.

You will then be set before Him, and not one of you will remain unexposed.

He who is given his ledger in his right hand, will say: "Here, read my ledger.

So he shall have an agreeable life

With fruits hanging low within reach,

(And told:) "Eat and drink to your fill as reward for (good) deeds you had done in days of yore."

But whosoever gets his ledger in his left hand, will say: "Would that I were never given my ledger,

I wish death had put an end to me.

Of no use was even my wealth.

Vanished has my power from me."

"Seize him and manacle him,

Then cast him to be burnt in Hell;

And string him to a chain seventy cubits long.

He did not believe in God the supreme,

Nor urged others to feed the poor.

That is why he has no friend today,