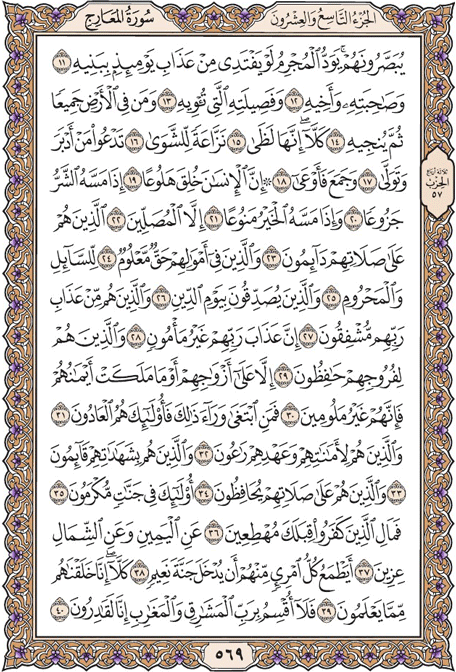 Though within sight of one another. The sinner would like to ransom himself from the torment of that Day by offering his sons,

His wife and his brother,

And his family who had stood by him,

And all those who are on the earth, to save himself.

But never. It is pure white flame

That would skin the scalp.

It will summon whoever turns his back and flees,

Who amasses and then hoards.

Surely man is greedy by nature.

If evil befalls him he is perturbed;

If good comes to him he holds back his hand,

Except those who closely follow (the Book of God),

Who persevere in devotion,

For the needy and those dispossessed,

And those who believe in the Day of Judgement,

And those who fear the punishment of their Lord, --

Surely no one can be secure from the punishment of his Lord, --

Are free of blame,

But those who seek more than this will be transgressors;

And those who fulfil their trusts and covenants,

Who uphold their testimonies,

And those who are mindful of their moral obligations.

They will live in gardens with honour.

In crowds, right and left?

Does every one of them wish to enter the garden of tranquility?

Never so. We have created them from what they know.