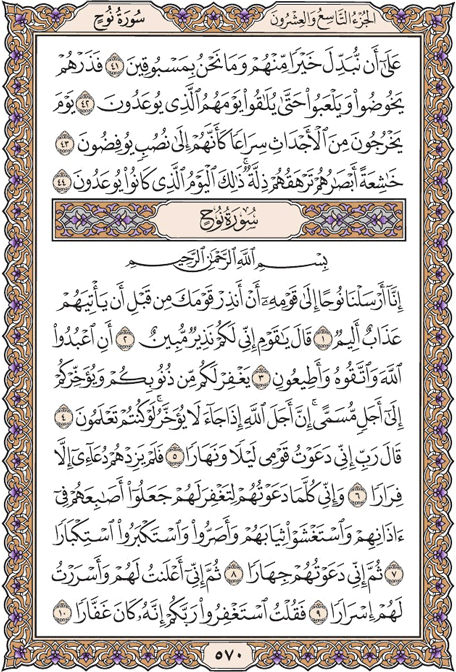 To bring better people than they in their place; and they will not be able to thwart Us.

So leave them to their vain disputes and amusement till they meet their day (of reckoning) promised them,

The day when they will come out of their graves in all haste as though rushing to their altars,

Eyes lowered, shame attending. That is the day they have been promised!

SENT NOAH to his people to warn them before the painful punishment came upon them.

He said: "O my people, I warn you clearly

That you should worship God and fear Him, and follow me

That He may forgive some of your sins and prolong your term till an appointed time. Surely when God's appointed time is come it will not be put off, if only you knew!

He said: "O Lord, I called my people night and day,

But the more I called, they only ran the farther away.

And every time I called them that You may forgive them, they thrust their fingers into their ears, and covered themselves with their garments, and became wayward, and behaved with downright insolence.

Then I called them loudly and more openly,

And declared to them in public and in private,

And I told them: 'Ask your Lord to forgive you. He is verily forgiving.