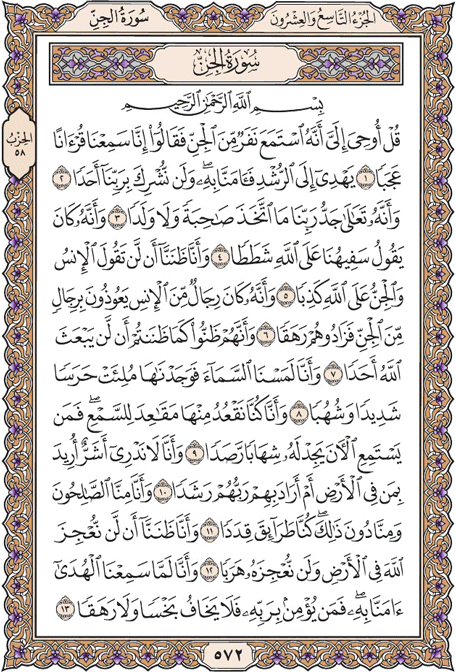 SAY: "I HAVE been informed that a number of jinns had listened; then said: 'We have heard the wondrous Qur'an,

Which guides to the right path; and we have come to believe in it, and will not associate any one with our Lord.

Exalted is the glory of our Lord; He has neither wife nor son.

Certainly the foolish among us say preposterous things of God.

We had in fact thought that men and jinns would never speak a lie about God,

But some men used to seek refuge with some jinns, and this increased their waywardness;

So they began to think, even as you do, that God would not resurrect any one.

We sought to pry into the secrets of the heavens, but found it full of fierce guards and shooting flames.

We sat in observatories to listen; but any one who listened found a shooting star in wait for him.

We do not know if this means ill for the dwellers of the earth, or their Lord wishes guidance for them.

For some of us are upright and some otherwise: Surely we follow different ways.

We realised that we could not weaken the power of God on earth, nor outpace Him by running away.

So when we heard the guidance we believed in it; and he who believes in his Lord will neither fear loss nor force.