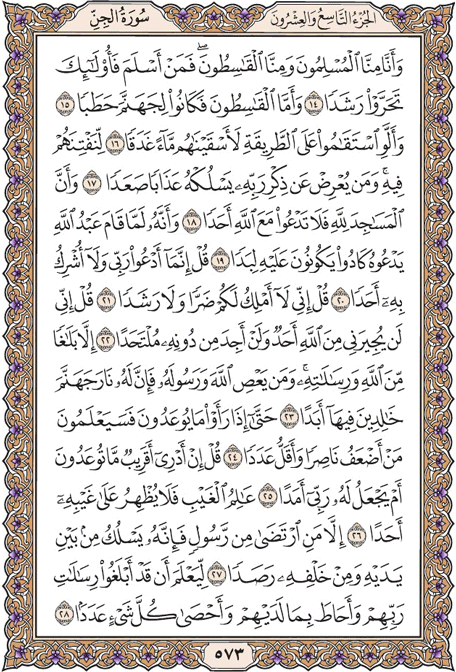 Some of us have come to submission, and some of us are iniquitous.'" Those who have submitted have taken the right course;

But those who are iniquitous will be fuel for Hell.

(Say): "If they keep to the right path We shall give them water in abundance to drink

In order to try them through it. But whoever turns away from the remembrance of his Lord, will be given increasing torment by Him."

All places of worship are for God; so do not invoke any one with God.

When the devotee of God stood up to invoke Him (the jinns) crowded upon him (to listen).

Say: "I call on my Lord alone and I do not associate any one with Him."

Say: "Neither is your loss within my power nor bringing you to guidance."

Say: "No one can save me from God, nor can I find a place of refuge apart from Him,

Unless I convey from God and deliver His message." For those who disobey God and His Apostle is the fire of Hell, where they will abide for ever;

Until they see what they are promised, when they will understand who is weaker in aid and poorer in numbers.

Say: "I do not know if what is promised you is near, or if my Lord prolongs its term.

He is the knower of the Unknown, and He does not divulge His secret to any one

Other than an apostle He has chosen, when He makes a sentinel walk in front of him and a sentinel behind,

So that He may know if they have delivered their Lord's messages. He comprehends all that has been given them, and keeps count of everything.