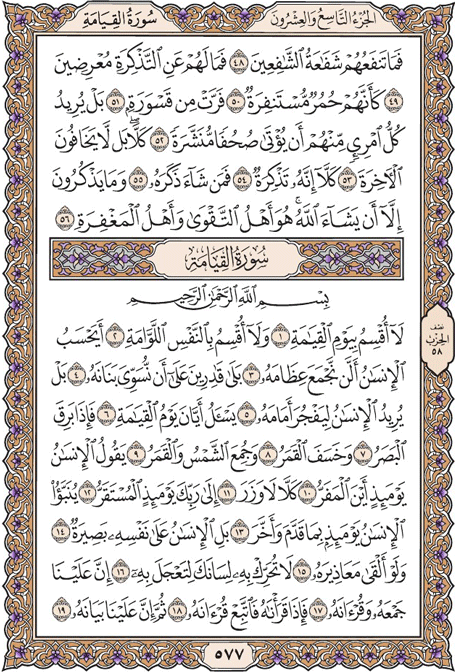 So, the intercession of intercessors will not avail them.

Why then do they turn away from the admonition

As though they were frightened asses

Fleeing from a lion?

In fact every one of them wants to be given open books (like the prophets).

By no means. In fact they do not fear the Hereafter.

Never so, as this is a reminder.

Let him then who heeds remember it.

I CALL TO WITNESS the Day of Resurrection,

And I call the reprehensive soul to witness:

Does man think We shall not put his bones together?

Surely We are able to reform even his finger-tips.

Yet man is sceptical of what is right before him.

He asks: "When will the Day of Resurrection be?"

Yet when the eyes are dazzled,

And the sun and moon are conjoined,

That day man will say: "Where can I find escape?"

Never so, for there will be no escape.

With your Lord alone will be the retreat on that day.

In fact man is a witness against himself,

Whatever the excuses he may offer.

Do not forestall (the revelation before its completion) by acting in haste.

Surely its collection and recitation are Our responsibility.

The exposition of its meaning surely rests on Us.