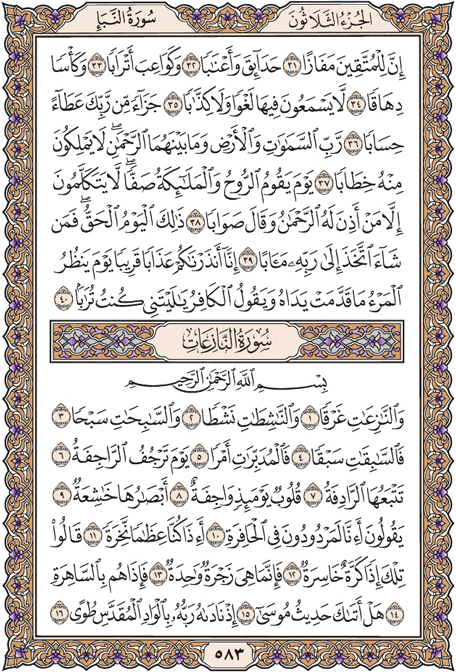 As for those who preserve themselves from evil and follow the straight path, there is attainment for them:

And graceful maidens of the same age,

And flasks full and flowing.

They will hear no blasphemies there or disavowals:

A recompense from your Lord, a sufficient gift,

The Lord of the heavens and the earth, and all that lies between them, most benevolent, to whom none may dare address a word.

The day the Spirit takes its stand, with the angels ranged in rows. None will speak except who is permitted by Ar-Rahman and says what is right.

That day is certain. So whosoever likes may prepare a way to his Lord.

We have indeed warned you of a calamity near at hand, a day when man will see what he had sent (of his deeds) ahead, and the unbeliever will say: "Woe alas. Ah would that I were dust!"

I CALL TO WITNESS those who dive and drag,

And those who undo the bonds gently,

And those who glide swimmingly,

Then outpace the others swiftly

And direct affairs by command,

Followed by the second blast,

Hearts will pound loudly on that day,

Eyes be lowered in submission.

They say: "Shall we go back to our original state

After having turned to carious bones?"

They say: "Then this returning will be a dead loss."

It will only be a single blast,

And they will wake up suddenly.

Has the story of Moses come to you

When his Lord called to him in Tuwa's holy vale?