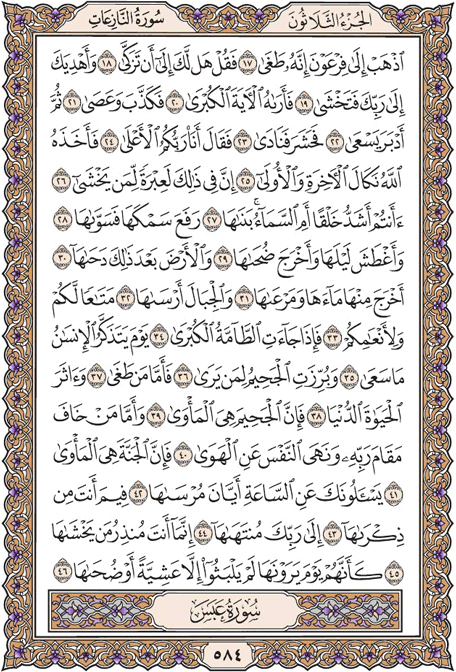 "Go to the Pharaoh who has become refractory,

And say: 'Would you like to grow (in virtue)?

Then I will guide you to your Lord that you may come to fear Him.'"

But (the Pharaoh) disavowed and disobeyed.

Then he turned away, deliberating,

And assembled (his council) and proclaimed,

Saying: "I am alone your lord, the highest of them all."

So God seized him for the punishment of the Hereafter and this world.

Truly there is a lesson in this for those who fear (the consequences).

Are you more difficult to create or the heavens? He built it,

Raised it high, proportioned it,

And afterwards spread out the earth.

He brought out its water and its pastures from it,

And stabilized the mountains

As convenience for you and your cattle.

When the great calamity comes,

The day when man remembers all that he had done,

And Hell made visible to him who can see,

Then he who had been rebellious

And who preferred the life of the world,

Will surely have Hell for his abode.

But he who feared standing before his Lord, and restrained his self from vain desires,

Will surely have Paradise for abode.

They ask you: "When will the Hour be? When is its time fixed?"

What do you have to do with explaining it?

The extent of its knowledge goes to your Lord.

Your duty is only to warn him who fears it.

The day they see it, it will seem they had stayed in the world but only an evening or its turning into dawn.