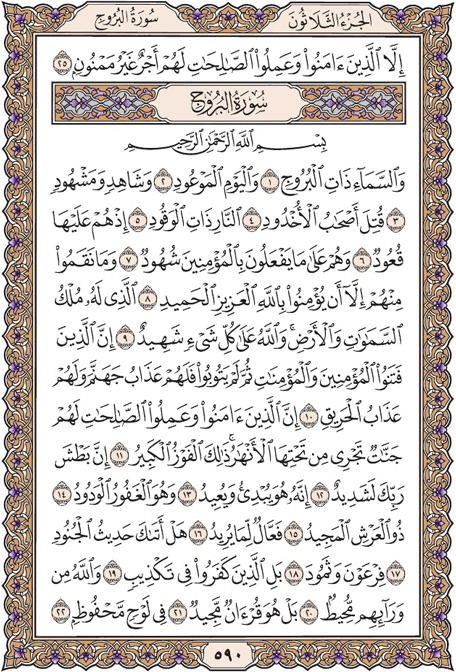 Except those who believe and do the right: For them there is reward unending.

I CALL TO witness the sky (bespangled) with the signs of the Zodiac,

And the promised day,

That accursed are the men of the trench

Full of fire fed by faggots,

As they sat around it

Witnessing what they had done to the believers!

They had no other reason for hating them except that they believed in God the mighty, worthy of praise,

Whose kingdom spreads over the heavens and the earth. God is witness over everything.

Surely for those who believe and do the right are gardens with rivers running by. That is the greatest success.

The grip of your Lord is severe indeed!

It is verily He who initiates and repeats.

He is the forgiving and the loving,

The Lord of the glorious Throne,

Who does as He pleases.

Has the story of the hordes

Of Pharaoh and Thamud come to you?

Yet the infidels persist in denial.

But God surrounds them from all sides.

This is indeed the glorious Qur'an

(Preserved) on the guarded tablet.