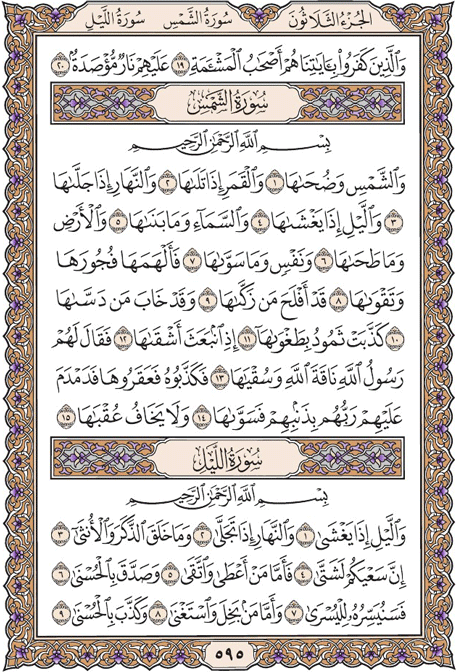 But those who deny Our revelations are the people of the left hand:

The Fire will vault them over.

I CALL TO witness the sun and his early morning splendour,

And the moon as she follows in his wake,

The day when it reveals his radiance,

The night when it covers him over,

The heavens and its architecture,

The earth and its spreading out,

The soul and how it was integrated

And given the faculty of knowing what is disruptive and what is intrinsic to it.

He who nourishes it will surely be successful,

And he who confines it will surely come to grief.

The Thamud denied (the truth) in their perverseness

When among them the great wretch arose,

And the apostle of God had to tell them: "This is God's she-camel, let her drink."

But they called him a liar and hamstrung her. So God obliterated them for their crime, and (destroyed) all of them alike.

He does not fear the consequence.

I CALL THE night to witness when it covers over,

And the day when it shines in all its glory,

And Him who created the male and female,

That your endeavour is for different ends.

Yet he who gives to others and has fear,

We shall ease the way of fortune for him.

But he who does not give and is unconcerned,