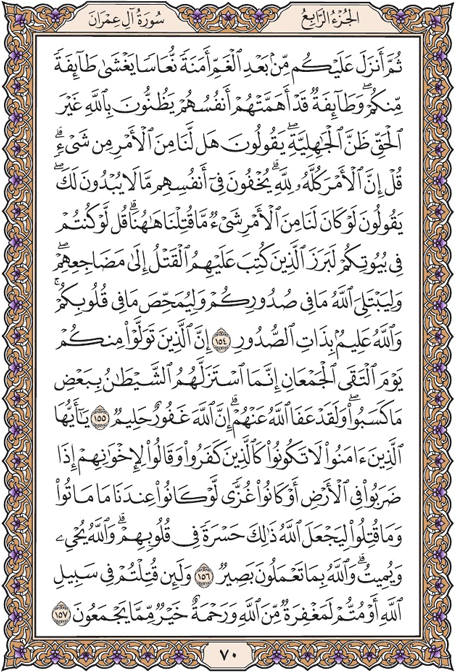 Then after affliction He Sent you a drowsiness as comes after security, overwhelming some among you, and making some anxious for themselves, and made them think thoughts of pagan ignorance; and they said: "Have we a say in any affair?" Say: "All affairs rest with God." They hide in their hearts what they do not disclose to you. They say: "If we had a say in the affair we would not have been killed in this place." Tell them: "Even had you stayed at home, those of you who were ordained to fight would have gone to their place of (eternal) rest. God had to try them to bring out what they concealed in their breasts, and to bring out the secrets of their hearts, for God knows your innermost thoughts.

All those among you who turned their backs on the day the two armies clashed (at 'Uhud) were surely induced by Satan to fail in their duty because of their sinful deeds. But God has already forgiven them, for God is forgiving and kind.

O you who believe, do not be like those who deny, and say of their brethren (who died) travelling in the land or fighting: "Had they stayed with us here they would not have died or been killed." This happened so that God may fill their hearts with grief. God is the giver of life and death and sees all that you do.

If you are killed in the cause of God or you die, the forgiveness and mercy of God are better than all that you amass.