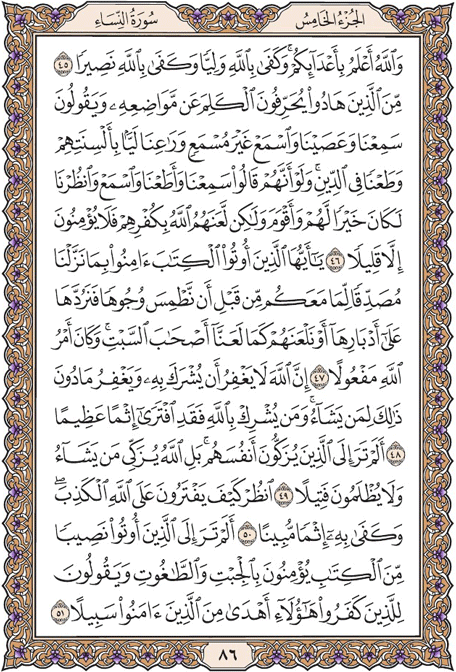 Some among the Jews distort the words out of context and say (in place of the right words): "We have heard and do not obey;" and, "hear without hearing," and "listen to us," twisting their tongues and reviling the faith. But if they had said: "We have heard and obey," and, "hear and regard us," it would have been better for them and more appropriate. But God has disgraced them for their lack of belief; and so only a few of them believe.

O people of the Book, believe in what We have revealed, which confirms what is already with you before We disfigure your visages and turn your faces about and curse you, as We did with those who had broken the Sabbath; and what God decrees comes to pass.

God does not forgive that compeers be ascribed to Him, though He may forgive aught else if He please. And he who ascribes compeers to God is guilty of the gravest sin.

Have you not seen the people who call themselves pure? Yet God purifies whom He pleases, and none shall be wronged even the breadth of a thread.

See how they fabricate lies about God, which is a clear sin.

Have you not seen those who were given a portion of the Book, who believe in false deities and evil powers, and say of unbelievers: "These are better guided than those who believe."