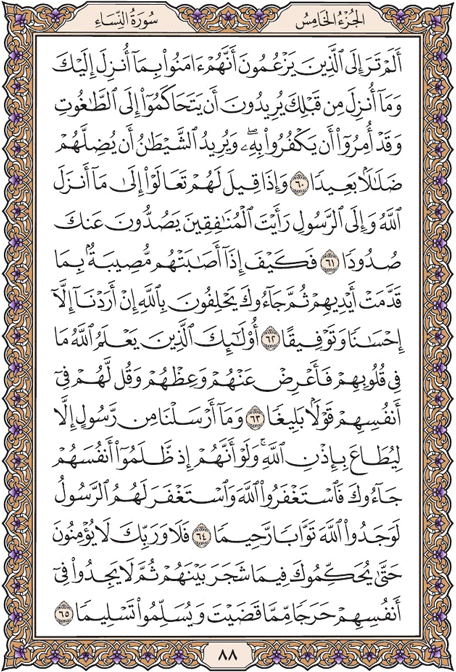 Have you never seen those who aver they believe in what has been revealed to you and had been to others before you, yet desire to turn for judgement to evil powers, even though they have been commanded to disbelieve in them? Satan only wishes to lead them astray, far away.

When they are told: "Come to that which God has revealed, and to the Prophet," you should see the hypocrites, how they hesitate and turn their faces away.

How shall it be when they suffer misfortunes for their own misdeeds? Then they will come to you swearing by God and saying: "We wish for nothing but good and amity."

The secrets of the hearts of these people are well known to God. So leave them alone, and counsel them and speak to them eloquent words that would touch their very souls.

We have sent no apostle but that he should be obeyed by the will of God. If they had come to you after wronging themselves and asked forgiveness of God, and you had also asked forgiveness for them, they would surely have found God forgiving and merciful.

Indeed, by your Lord, they will not believe till they make you adjudge in their disputes and find no constraint in their minds about your decisions and accept them with full acquiescence.