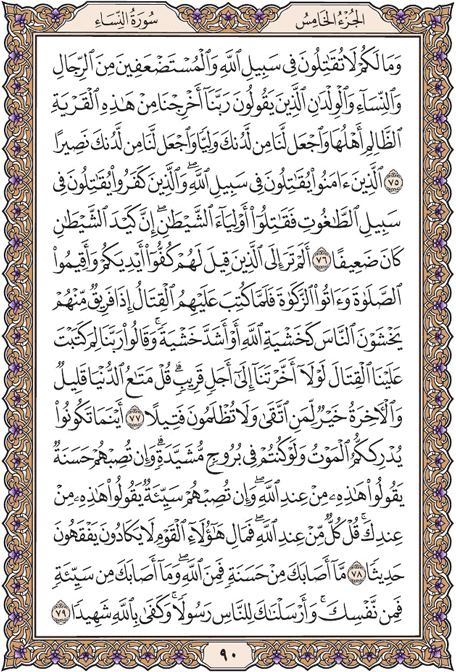 What has come upon you that you fight not in the cause of God and for the oppressed, men, women and children, who pray: "Get us out of this city, O Lord, whose people are oppressors; so send us a friend by Your will, and send us a helper."

Those who believe fight in the way of God; and those who do not, only fight for the powers of evil; so you should fight the allies of Satan. Surely the stratagem of Satan is ineffective.

Have you not seen the people who were told: "Hold back your hands (from attacking), observe your devotional obligations and pay the zakat?" But when they were commanded to fight, behold, a section among them were filled with fear of men as though it were the fear of God and even more, and said: "O Lord, why did you make war compulsory for us? Why did you not allow us to live a little more?" Say to them: "How short-lived is the commerce of this world; but that of the next is best for those who fear God; and you will not be wronged the breadth of a thread."

Death will overtake you wheresoever you be, even in the mightiest of towers. Yet if some good comes their way they say: "It is from God;" and if it is evil that befalls them, they say: "It is indeed from you." Say to them: "Every thing is from God." O, what has come upon the people that even this they fail to understand!