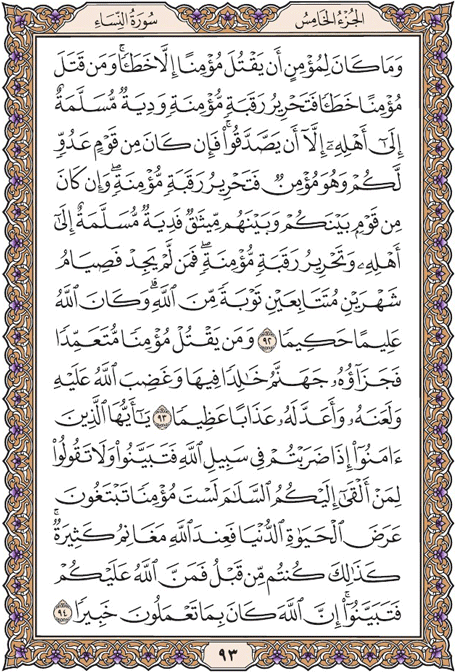 It is not for a believer to take a believer's life except by mistake; and he who kills a believer by mistake should free a slave who is a believer, and pay blood-money to the victim's family unless they forego it as an act of charity. If he belonged to a community hostile to you but was himself a believer, then a slave who is a believer should be freed. In case he belonged to a people with whom you have a treaty, then give blood-money to his family and free a believing slave. But he who has no means (to do so) should fast for a period of two months continuously to have his sins forgiven by God, and God is all-knowing and all-wise.

Any one who kills a believer intentionally will be cast into Hell to abide there for ever, and suffer God's anger and damnation. For him a greater punishment awaits.

O believers, when you go out on a journey in the way of God, be discreet and do not say to anyone who greets you in peace: "You are not a believer." You desire the gain of earthly life, but there are prizes in plenty with God. You were also like him (an unbeliever) in the past, but God has been gracious to you. So be careful and discreet, for God is aware of what you do.