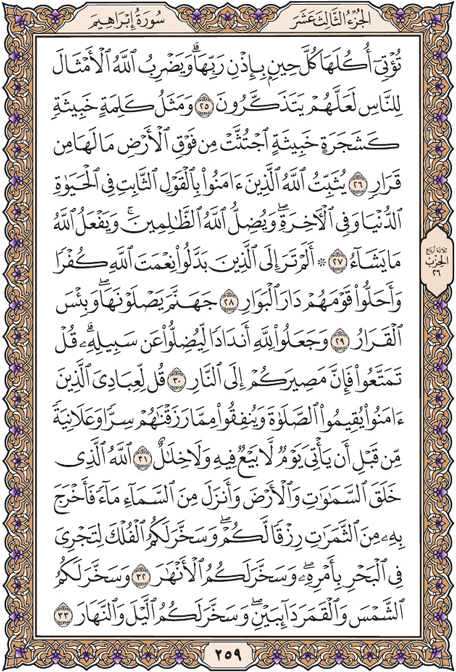 It produces its fruit all the time, by permission of its Lord. And Allah presents examples for the people that perhaps they will be reminded.

And the example of a bad word is like a bad tree, uprooted from the surface of the earth, not having any stability.

Allah keeps firm those who believe, with the firm word, in worldly life and in the Hereafter. And Allah sends astray the wrongdoers. And Allah does what He wills.

Have you not considered those who exchanged the favor of Allah for disbelief and settled their people [in] the home of ruin?

[It is] Hell, which they will [enter to] burn, and wretched is the settlement.

And they have attributed to Allah equals to mislead [people] from His way. Say, |Enjoy yourselves, for indeed, your destination is the Fire.

[O Muúammad], tell My servants who have believed to establish prayer and spend from what We have provided them, secretly and publicly, before a Day comes in which there will be no exchange, nor any friendships.