The two friends took a break in which they had a short nap, and then exchanged seats in order to renew their activity. Then Michael started talking.

Michael: I stand to be corrected, but divorce seems quite common in Muslim societies, and I think that one of the reasons for that is that it is permitted in the Muslim faith…

Yousef: … First, my dear friend, let me interrupt by saying that Islam wasn’t the first religion to legislate divorce.. Divorce was wide-spread even before Islam in almost the entire world. Before, if a husband felt angry at his wife, whether for a true reason or not, he would simply kick her out of the house. The woman didn’t have any rights and couldn’t claim any compensation from the man either. If we consider other systems of life and compare them, we have learned from history that when the Greek civilization flourished, divorce was common, without limitations or conditions. As for the Jewish religion, it also permits divorce, however it affords this right to the husband alone, with a decision he takes individually. He has the right to divorce his wife without an excuse, but if there is one then its better. - and let me just mention here that if a woman then marries another husband after being divorced, she can't remarry the first one.

Second: Is divorce really so common in Muslim societies to say that permitting divorce in Islam is the reason for this? Let's discuss some statistics from around the world as another comparison:

In Japan, the average divorce rate reached 366 per one thousand marriages in the years 2000-2004.

Is it true to say then that divorce is prevalent in Muslim societies and that the reason for this phenomenon is that Islam permits it?

Michael: But it is known that Islam is famous for facilitating divorce, when compared to other religions and social systems.

Yousef: This statement opens the floor to more than one topic which needs discussing; allow me to deal with them each in detail.

Yousef: The first topic concerns believing, in an absolute sense, that it is an easy matter to divorce in Islam. No legislation of course, or social system, encourages divorce. I might agree with you that divorce may be taken lightly by those who do not adhere to the teachings of Islam and abuse some of the powers granted to them without right. However, at the same time, you should know that the teachings of Islam should not be blamed for this behavior, for these teachings are clear about controlling and organizing this issue in a way that reduces any negative effects. What is happening in some communities is actually the result of their moving away from the essence of the religion of Islam concerning their legislations and regulations.

Michael: Can you clarify this point a bit more?

Yousef: The origin of marriage in Islam is that it is a permanent contract and it is forbidden to limit it to a certain time; which means that married life is supposed to continue between the couple until death separates them. The marriage contract has been described as a firm and strong covenant, which calls for respecting it, and not intending to break it. Moreover, divorce is an abhorrent issue in Islam except if it is absolutely necessary, and when it is, Islam guides us before going through divorce to make all possible attempts to make amends between the couple and to complete certain actions that limit divorce. If it is still found that divorce is necessary, then the procedures should be accompanied with certain ethics which safeguard the dignity of all parties involved and protect the family:

Islam calls on the husband to retain his wife on reasonable terms and not divorce her because she may have a trait he does not like. Instead, the husband is urged to consider her good traits so as to make him refrain from divorcing her. It protects the sanctity of marriage from being tampered with, and warns against uttering the word of divorce jokingly or taking it lightly. The husband is ordered to control his temper and be patient when correcting his wife. If the couple cannot solve their problems, Islam has given the permission to other parties that are interested in the welfare of the couple to find a solution for the problems between them. Then, the final divorce is done over stages to allow the couple to experience the negativities that result from divorce and to give them a chance to return to each other and reunify their family. This is the reason why Islam does not give a chance to the couple to destroy their marital life from the first dispute that occurs between them, but gives them a three-staged chance. The husband has the authority, after the first and second divorce, to return to his wife. Even after the third, Islam allows the couple to return to each other; however this can only happen after they pass through something which is striking and harsh for the two of them, which includes the divorced woman first marrying and divorcing another man.

Michael: This is the first topic, what else?

Yousef: The other important point is the wrong idea that exists concerning the reality of other non-Muslim communities. In fact, divorce in these communities can take place for trivial reasons, and I am sure you are already aware of that!! In America, for example, judicial proceedings mention that there could be a divorce if one spouse is addicted to the computer, or to following programs or matches on TV. In Canada, it is enough for one spouse to prove that his partner suffers from snoring when sleeping in order to get an immediate divorce. In Italy, one spouse can be granted a divorce if he/she is forced to carry out household chores. In Britain, taking any of the husband's affairs lightly, even if it was something as small as breaking a souvenir, is considered a justification for a divorce.

As for Japan, the court may agree to pass a judgment of divorce if one partner sleeps in a way that the other doesn't like.

Michael: What you've just mentioned Mr. Yousef is correct, but it happens in secular judicial systems which are separate from religion. Christianity, however, has a known stance towards divorce and it is very strict in preventing it, except in regards to limited faults that are in reality difficult to prove in order to actually obtain a divorce.

Yousef: I would argue that this strictness agrees neither with human nature, nor with human life. This is clear in the case of some Christians living in Muslim countries who see the difference between the two religions, and may even leave their religion to escape that hardship when they reach a milestone in their social life and have no solution in their religion to the nature of life and its complexities.

This is what distinguishes Islam from other ways of life. While Islam makes it obligatory that the marriage contract is for life, it knows that its legislations are for people who live on earth, who have human characteristics, temperaments and for which circumstances may change. Islam therefore allows, at the same time, a margin for having made an error in choice that may not be clear except after a certain experience. It takes into account that the change in these conditions, or falling into this error, may result in negativities of varying degrees. These negativities may be bearable sometimes, but they may be serious and unbearable other times, and may lead to psychological, social and even material losses. Islam, thus, prescribes how the couple is to handle these errors if they find living together is impossible and ways to make amends between them fail. Islam, with regards to this point, is definitely realistic, and absolutely fair to both men and women, and the entire family, as correcting one's life, even if it entails separation and starting anew, is better than torturing all the members of the family with the flame of disagreements and discord, or to continue with a marriage in which the true purpose and objectives of marriage are absent. The two most important purposes and objectives are, psychological repose, through love and compassion, and also the establishment of a stable and successful family. Divorce in Islam is a treatment and a correction of one's life, an opportunity for change, and a chance given to start a new, more successful life.

I think that legislating divorce with the controls mentioned in Islam illustrates the tolerance of this religion, and how it is realistic.

Michael: But why does Islam make divorce a right solely given to men alone, is not that being unjust to women?

Yousef: Again, the matter should be viewed through a total framework that takes into account all dimensions. What I mean is that we should look at this through a complete social system, that starts with marriage itself and its objectives, and passes through the concept of the family and the function of each party in that family, and each party's responsibilities, duties and rights.

Here, we must mention that it has been scientifically proven that women are inherently more emotional and moody than men, which makes men more aware and appreciative of the consequences of this matter, and better able to control their temper, and curb the passion of anger and rage.

In Islam, the husband alone suffers the financial losses of a divorce and he is responsible for the financial demands after the divorce. Undoubtedly, these financial expenses that result from making the decision to divorce are additional reasons why couples should have prudence and restraint.

However, even though it gives the right for divorce to men alone, it does not neglect to legislate that a wife can be granted a separation from her husband if she has a good reason. This is what is known as khul' (that is, divorce at the instance of the wife), with regulations and legislations that safeguard the rights of all parties.

Would you now like, my dear friend, to talk about the status of women in your country?!

Michael: I think that we should first have lunch. 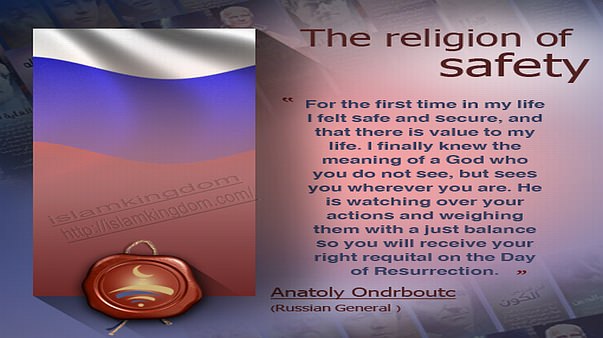 The Woman who is a Queen

A Light from Heaven (Mankind’s need for the message)

The Rays of Muslims Rise over Humanity